There is an interesting discussion over at Sarah’s blog, about astronomers being driven by ambition and greed just like everybody else. I remember this concept shocking Donald Pettie, the ex Chief Engineer at ROE, who moved there from Ferranti back in the eighties. He thought academics would be gentle, polite people. In some ways this was true, but he told me that he soon learned that the average astronomer would be prepared to sell his grandmother for an extra night on a big telescope.

There was something of an unseemly stampede last year when the ATIC results were announced – a claim of a hump in the cosmic ray electron energy spectrum, that could be a feature caused by the decay of dark matter particles. Gold !!!!!!! At a conference where the pre-publication results were presented, someone apparently photographed the screen, measured the points, and rushed a paper out. Of course this was only one of a gazillion papers with different interpretations. But now Fermi has made this all seem a bit daft : a paper just out in Phys Rev Lett has made an absolutely exquisite measurement of the CR energy spectrum from ten to a thousand GeV, which slides neatly underneath the ATIC data. Bump not there. See below. 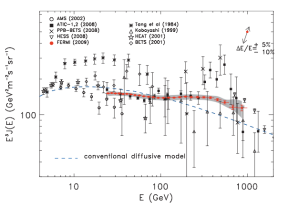 Well this result has already caused a splash in the popular press and astroblogs (here is Sean Carrol’s take), but I had it in mind because I just attended a SLAC seminar explaining the result, given by Luca Patronico. The particle physicists are still seeing the glitter of gold in the river; the beautiful Fermi data disagree not only with the ATIC hump, but also with the “conventional diffusive model” … there are already papers out on ArXiv with revised DM fits…

However I am glad to report that the astronomers in the audience were somewhat saner. Not only is it possible that nearby pulsars could produce this “excess”,  at least one older wiser head said “errr… you aren’t taking that conventional diffusive model too seriously are you ? We don’t really understand the transport of cosmic rays through the ISM in that level of detail. Its kinda tricky. I can give you any curve you want”.

Maybe its relevant that the person who said this is already mature and respected … no need to grab at every chance of fame….

This entry was posted on Friday, May 8th, 2009 at 6:01 am and is filed under Astronomy, Science and Technology. You can follow any responses to this entry through the RSS 2.0 feed. You can leave a response, or trackback from your own site.