The blog awakens. One interesting thing is that even when I haven’t written anything for weeks, there are still people reading it. Seems to be a random assortment of old posts.

I guess I should write something about the Parliamentary Select Committee report  but Peter already blogged it  and didn’t get any debate, so maybe it needs a bit more thought, aka come up with provocative line.

Instead I shall continue my occasional travelogue series. I know you love it. Here I am in Naples for the twice-yearly IVOA interop. Keywords for Napoli are : chaos; pizza; chaos; antiquity; noise; sfogliatella; chaos; religion; volcano; chaos; and chaos. I do like the chaos. But its exhausting.

There are churches and shrines everywhere, packed into streets so narrow that Google Maps can’t name them. The only one with more than about twelve feet of space in front of it is the Cattedrale San Gennaro. Twice each year a miracle occurs  at this location. A vial containing the dried blood of San Gennaro himself spontaneously liquefies. A few years back I was lucky enough to witness this miracle. Well. I say witness. Actually I was craning my neck to see over the heads of about eight million people, and could just about see some blokes in funny costumes waggling something.

So is this what I believe ? Do us a lemon, John. No. I believe in Hollywood. Bear with me.

Having a few hours spare I went to see the National Archaelogical Museum. This contains some marvelous frescoes and mosaics, some preserved in Pompeii. Here are two favourites : the famous portrait of Sappho, which actually probably isn’t; and a lovely mosaic of fishes.

There are also rooms and rooms of rather dull and pompous Roman statues. However I did rather enjoy the gallery of emperors, and spotted a lovely contrast. On the left is Marcus Aurelius, the Philosopher-Emperor. As we know from watching Gladiator, he was a wise and just ruler as well as a deep thinker. I have his “Meditations” and even read about half of it one day before I got hungry. And golly gosh his nobility just leaps out of the bust. One the right is his son Commodus, who as we also know from Gladiator, was a snivelling shit, a nasty piece of work, and a dastardly cheat. Gibbon dates the beginning of the Decline from his reign. And blow me, his bust looks just like Joaquin Phoenix in the movie. I definitely wouldn’t trust this man. 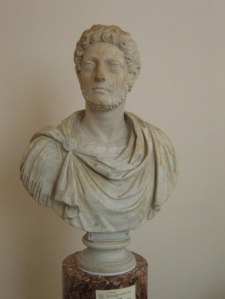 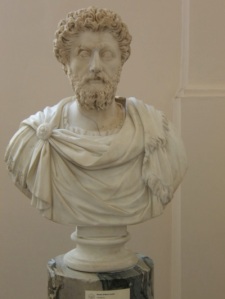 All temptation to point out resemblances to current personalities will be avoided.

This entry was posted on Sunday, May 15th, 2011 at 5:06 pm and is filed under Astronomy, Life. You can follow any responses to this entry through the RSS 2.0 feed. You can leave a response, or trackback from your own site.

5 Responses to I believe