Only connect, as Goethe said. Or was it E.MForster? Or did I already already use that gag in an earlier post? Anyhoo. Two or so weeks ago commenters on my own nuclear blog post made me eat humble pie , liberally sprinkled with Thorium. Last week I was in Thurso, in the far distant north of our fair land. “Thurso” ought to mean  to Thor’s town, but sadly it doesn’t, actually meaning “Bull’s River” or some such. However, it is just down the road from Dounreay, for many years the home of Britain’s development programme in fast breeder reactors. The last Dounreay reactor, the “Prototype Fast Reactor” was shut down in 1994, but the plant still employs large numbers of people, because of the extended decomissioning programme. The aim is to return to a brownfield site by 2036..  Nuclear power ain’t simple. Also, the MoD still run some experiments there. Its all quite nicely explained in this wikipedia page on Dounreay.

a such a remote area, with a population of a few tens of thousands, Caithness has a substantial sprinkling of high-tech and generally educated folk, who work for Dounreay and related activities, and an active and lively Astronomical Society – the Caithness Astronomy Group. These nice folk invited me up. Being in the distant north, it takes a whole day to get there even from Edinbrr, so I was there for several days, talking to multiple primary schools and doing a public talk as well as the usual astro-soc talk.

Caithness is a great place for amateur astronomy. Its as cloudy as most of Britain, but its DARK. When I asked the primary school kids who had seen a shooting star, 80% of the hands went up. I have never seen that in Edinburgh or London … and a large fraction of the populace have seen the Milky Way. You just walk out and there it is. The CAG chairbeing, Gordon Mackie, sent me the shot you can see to the left, taken at Loch More. 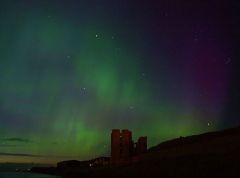 Caithness is also a great place for seeing the Northern Lights. Frustratingly, there was a massive CME arriving while I was there, but it was raining … Here is another Gordon Mackie shot to make up for it. Another ace astro-photographer is Stewart Watt. You can see his collection at “Under Highland Skies“.

But possibly the most exciting is Maciej Winiarczyk, who specialises in time-lapse astrophotography. He has lots of stuff on both YouTube and Vimeo. Take a look at this. But first pour a glass of Old Pulteney, sit back, and relax.

Oh, and its a nice place for a holiday.